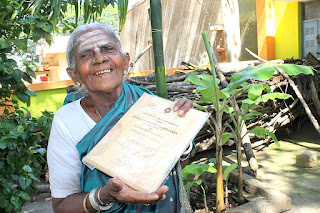 Saalumarada Thimmakka (who is a living green legend aged beyond 100 years) and her husband Chikkaih (who expired in 1991) are from a village in Karnataka, illiterate, belong to the labor class, had no children, and considered the plants they planted besides a highway close to their village as their children and legacy, and ended up planting and taking care of 384 (mentioned as 284 in some references) banyan trees in an 1.5 km stretch of the highway.  Also, there is a mention of she planting around 8,000 trees over 65 years, but this mention is not universally referred.  The key inspirations came from the work around 384 banyan trees she planted.

Salumarada Thimmakka’s work became an early global icon of an individual action during the time whole world was going through an identity crisis around environmental issues which had its first peak in 2008.

Salumarada Thimmakka’s individual work is a source of inspiration, at least for the following reasons:
1.       She is a woman, illiterate, belongs to poor class, and yet she overcame her background and challenges, and made a huge difference to the environment she lived around.
2.       She did not plant these trees as an act of charity or fashion. Each tree she planted were treated as one of her children. The act was driven by a sense of deep purpose in her life. So, it poses an important question to the self, what is my purpose? Once we become present to this question, our transformation begins.
3.       Even if one does not choose to become present to this deeper question, her work poses a challenge to any individual on this planet on the priorities of environmental issues, green agenda, sustainability etc at the level of one’s ego.  She serves as an icon against any excuse one can come up against facing the reality, taking responsibility and start with an action within one’s means and eventually going beyond.

Interestingly, she became more famous locally for her action when she got an international recognition in an unique way. Ritu Primalani, in 2003, established Thimmakka’s Resources for Environmental Education in Berkely California.  It is besides the point that some misunderstanding was developed between the two individuals later, prompting Thimmakka to file a case, but in vain as the court upheld the legal validity of Ritu Primalani’s actions.

When I came to know about Thimmakka, I also knew that there are many more individuals with humble background making huge difference to the green agenda in their environment. But I was quite inspired by her for the reasons that she is a local icon, but was recognized internationally first before people like me could come to know about her, meaning we need a slap like this to wake up and take notice of priorities of our soil and environment.

Thimmakk’s success made me to search my soul as to where I stand on the green agenda in terms of genuine individual action. The challenge I recognized was that we need to go beyond our excuses, and validate the green agenda at the sanctum sanctorum of our very being, and confirm whether there is any space for such an agenda in the very purpose we live. I launched the “Billion Trees and Beyond” drive only after I could validate and confirm that it is one of the core values of my being and purpose, and I want to stand up for it, do something about it, and go beyond to inspire millions towards billion trees and more. Even when I saw this clarity initially, I needed a level of transformation in myself to publicly stand for it and to start my humble actions towards it, and this took a minimum of four more years to do so. This transformation journey taught me immensely that we all need a degree of unlearning and unbecoming which goes against the environmental agenda, and this journey is quite daunting due to the identity crisis it leads us into.

Saalumarada Thimmakka is an inspiration especially during this period, because she simply challenges with her story asking what is that you can do, what you want to do, and finally what you are transformed to do.

I am ok if one want to simply embrace the challenges her story poses just at an intellectual level.  Then I simplify the issue is as follows: If Saalumarada Thimmakka, who is an illiterate, poor and unempowered, chose to do this much (384 trees or 8,000 trees), what is that you can do? What is that you want to do? And Why? Is that all you can do or can you do better? Why and how?

I took this question personally, and responded first at the level of value and meaning, then submitted my own personal transformation for this value and meaning to culminate as a reflexive purpose in my life, and again allowed this purpose to eventually express as a vision for self and the rest in the name of “Billion Trees and Beyond”.  This whole journey took me about seven years to complete, from 2011 through 2018, the vision appeared as a day dream first in 2014. I took another 4 years to transform myself to nurse this day dream towards a purpose and vision.

Billion Trees and Beyond is a ripple I am attempting to create, it may or may not succeed, but my personal commitment will remain at least to plant 1,000 trees over 10 years. I am sure, with some help from persons like you, it is not difficult to gather at least 1,000 more such people with such a mission. (All can join hands, with no such constraints or limits).  That is our first million trees.  So working together, eventually we will cross billions, and there will be a day, may be much beyond my own time on this earth, where the people associated with this drive will look back and laugh wondering why this idiot could not come up with a more powerful vision, “Trillion Trees and Beyond”, which actually rhymes better than the current name,  I too laugh at this right away hoping for such a moment in the future, but the fact of the matter is that our true challenge is our inability to see the extraordinary actions we can influence in spite of our very ordinary being, and hence I defend the current name as a bridge between our ordinary being and the extraordinary results we will be causing in the days ahead by coming together and working together.

Therefore, for this context alone, while there are many I need to mention as the inspirations, Saalumarada Thimmakka remains on the top.

Bowing down to an ordinary being who demonstrated to the whole world as to how a simple set of meaningful actions over a time could make a difference beyond original expectations,

And also calling upon self and many other million such ordinary beings globally to be open towards a journey that can chart an extraordinary destiny around us through simple yet very meaningful, slow and steady actions around us within our means and constraints, 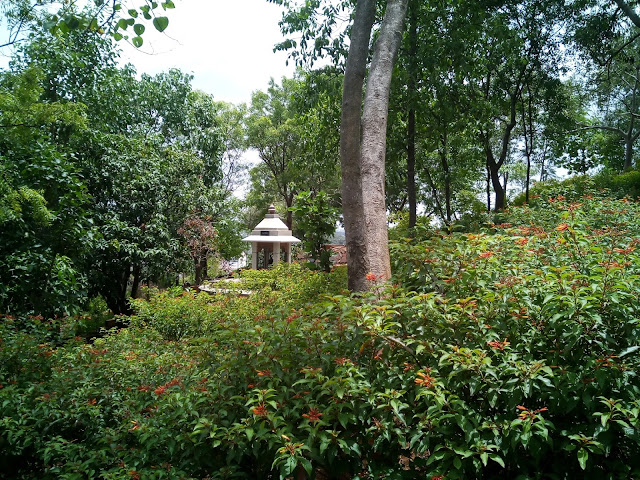 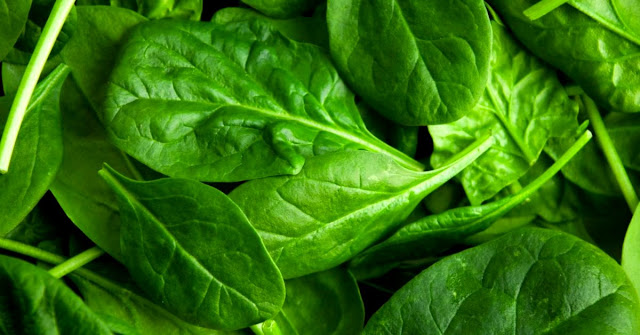 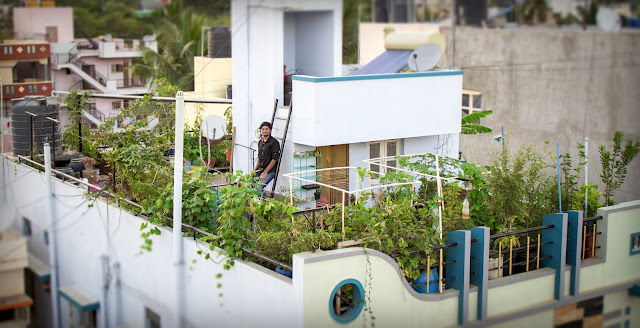 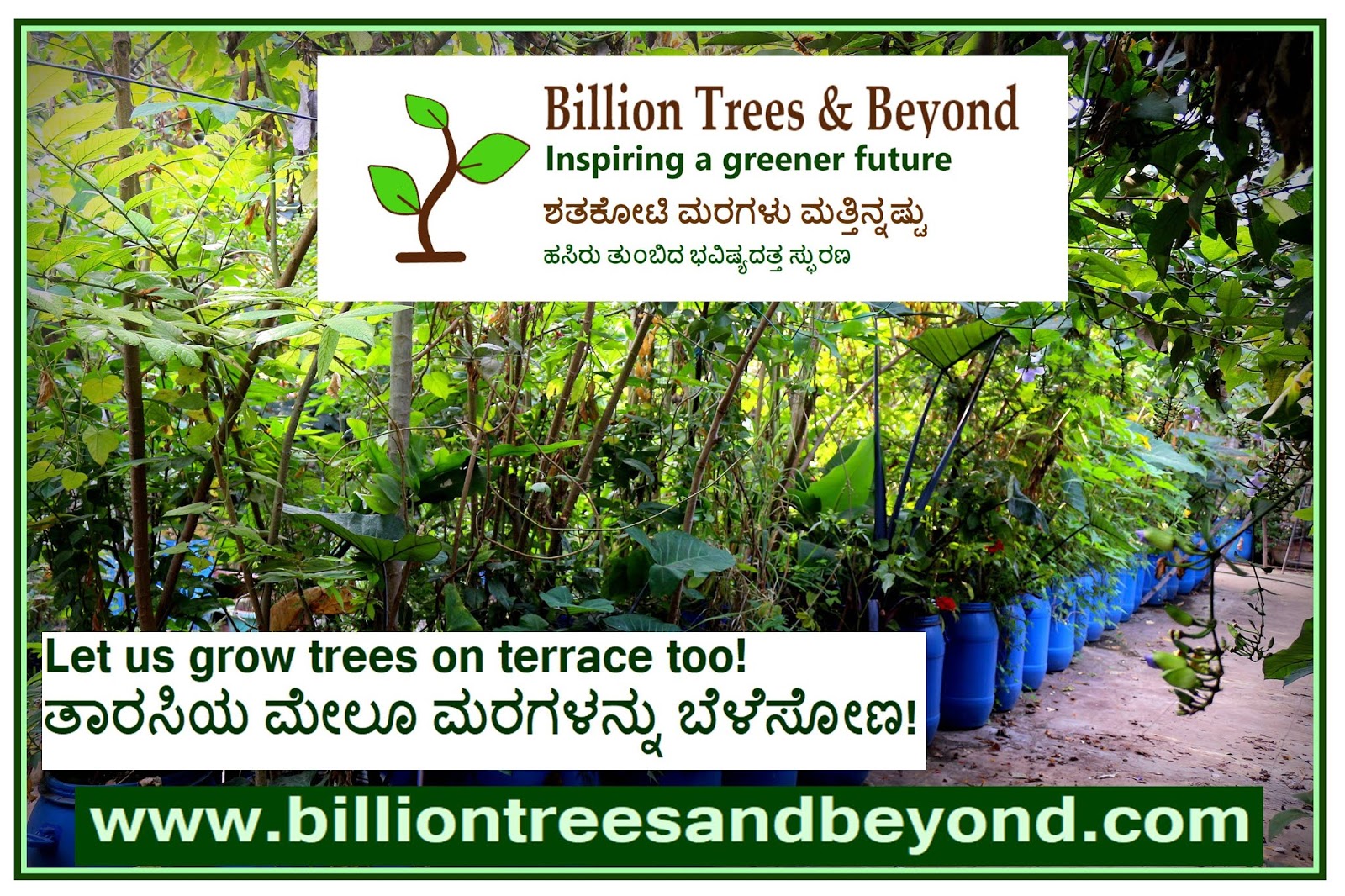